The Baltic Sea is a unique but exposed ecosystem with a small exchange of water, low and varying salinity, and large seabed areas with poor or no oxygen. Cod is one of most important fish species in the Baltic Sea. As the top fish predator in the Baltic food web cod has huge ecological and historical value, as well as significant economic value in terms of human consumption and recreation. Combined with decades of overfishing and failed management of the Baltic Sea, the cod stocks are currently facing a critical situation.

Cod depends upon a certain level of salinity and oxygen to be able to reproduce and for the eggs to survive. Today there is no oxygen near the bottom where the salinity is high enough for the eggs to survive. Presently successful reproduction is possible in only one area in the southern Baltic Sea. In order for the eastern Baltic cod stock to have a chance to recover, a wide range of measures, ranging from reducing the effects of eutrophication to continued regulation of cod fishing, are needed.

The project “ReCod - Release of Small Cod in the Baltic Sea” will investigate the possibility to assist cod past the vulnerable egg stage and hence increase the number of small cod in the sea as a step to strengthen the fish population. The project will conduct trials using cod larvae to see if and how they survive, whether they are able to establish themselves in new locations, and what are the costs of establishing these practices. If the measure is successful, this could provide a template for future large-scale efforts as a means to strengthen the cod stock in the eastern Baltic.

The demonstration project will be conducted at the Research station Ar on Gotland, situated in the middle of the Baltic Sea. The project will catch Baltic cod from the eastern stock and allow them reproduce via natural spawning at the Researchstation Ar. The idea is that the cod larvae should make it past the egg stage and be ready to start eat plankton. The larvae will be released into selected locations in the central Baltic Sea. After the release, ReCod will continuously  scientifically sample the areas to monitor the results of the project. 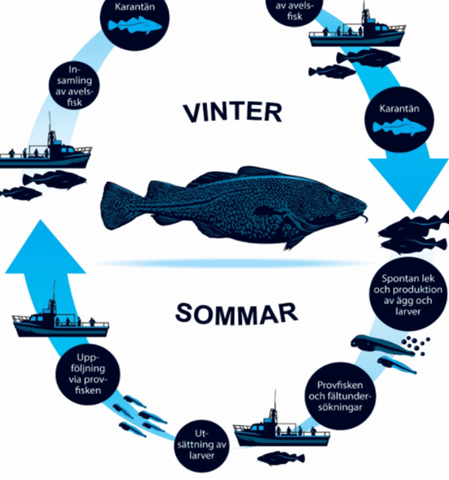